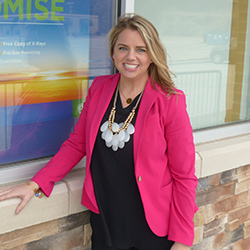 When she joined Aspen Dental eight years ago as a Dental Assistant, becoming a Territory Director wasn’t  a thought.

Fast forward to January 2017 when Lindsay Amstutz is promoted to, you guessed it, Territory Director.

The daughter of a DA and formerly the director of a daycare center and sales associate at The Buckle, a clothing retailer, Lindsay joined Aspen Dental in 2009 largely because of the career path described to her.

“I knew I wanted to become an Office Manager or Regional Manager,” Lindsay said, “but being a Director was the furthest thing in my mind. I was very comfortable with the career path in front of me. Crystal Freitager was my Regional Manager and she laid out a great path for me.”

Lindsay dove in. At first, a training DA, the California native became an Oral Surgery DA in 2011, an Office Manager trainee a year later, Office Manager in Merle Hay in 2013, Regional Manager in Eastern Iowa in 2015, and then Director in Missouri in 2017.

“Building relationships, stepping in when people need you, and people knowing you’ll go the distance for them is the name of the game,” Lindsay said. “I’ve learned that if you say ‘Yes’ and do a really good job you get rewarded and can really grow in the organization.

“This company is amazing in terms of career path,” she added. “The sky’s the limit.”

And now, after having modest goals when she joined the company, Lindsay finds herself re-evaluating her next step.

“This company is amazing in terms of career path.”

“I’m hoping for Division Vice President at some point but want to do the best I can as a Director.”

Lindsay offered some great advice to team members who want to advance in the organization.

“Never underestimate yourself. Support the doctor and the team. Be flexible and, above all else, bleed Aspen Blue.”